This is a big story.  Huge.  Starwarsguys.com exclusive content, and I can barely believe my eyes.  Let me explain:  I went antique shopping today at my local antique shop to find some deals and steals, I’m trying to update the stuff at SWG headquarters so I needed to go out and get some new stuff.  While I was there, I ran into my friend Chaimes Parker.  He had quite the story to tell me.

He stepped out of his shop in the afternoon after one of the massive Boston Snow Storms to a huge surprise: his car had been plowed in and completely covered, with a snow bank 6 feet high and 20 feet long.  He was confused!  He didn’t understand why someone would do this to him or why the plow guys didn’t see that his car was there.  It didn’t make any sense to him.  That is, until he found this article on Men’s Rights site brobible: 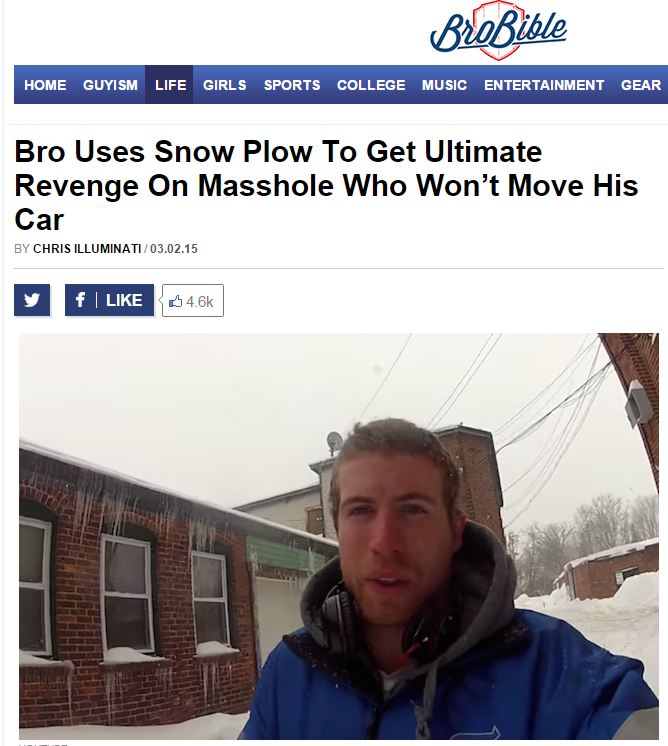 The setting looked all too familiar: in fact, it was the alley his car was plowed into!  So upon further digging, he found out that local BroBible enthusiast Brendan Johnson was behind the extreme bullying case.  Shocked an confused, Chaimes watched the following video which documents Johnson’s hate crime:

We were so shocked and awed over here at SWG headquarters, we couldn’t believe it!!  Especially after seeing that the video has gone viral and has over 80,000 views!  It makes you wonder who watches the trash content made by local bully and chauvinist/Redsocks fan  Brendan Johnson.  But there you have it.

So, I decided to interview Chaimes about the incident so you can see the poor disposition of the guy and feel some sympathy.  It’s a classic jock/nerd, David/Goliath, jerk/good guy scenario.  Check out the interview below:

Guys, I still can’t believe what I’m seeing.  Needless to say, we’re pretty fired up about it over here at SWG headquarters.  That’s why we’re rolling out a special version of the site this week: #brendanjohnsonweek.  Stories about the bully, trying to get to the bottom of it, see who the guy is.  I need the help from the community.  If you have stories of bullying from Brendan Johnson please forward them along to stu@starwarsguys.com and I promise I’ll get it up on the site.  This is a big one guys.  Let’s help out Chaimes and stop bullying.  Sound off below with your thoughts!!